What are ERW bond lines?

An X-ray diffraction device is useful for analyzing and measuring the structure of the materials in an around tube welds.

When cross-sectioning representative weld sections in electric resistance welding (ERW) (also known as high-frequency resistance welding), engineers can encounter a line at the center of the weld that varies in shape, width, orientation, and shade, depending on the steel type and etching technique used (see Figure 1). Nickel Alloys Manual Electrode Seal Materials 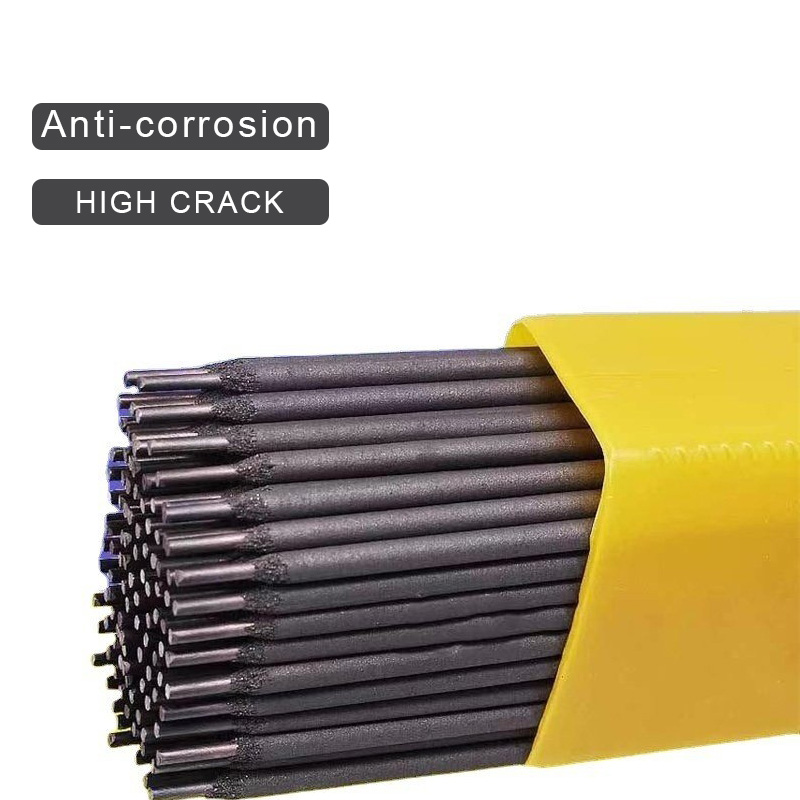 Researchers from Thermatool Corp. found that this bond line exhibits higher hardness than the surrounding weld in SAE 4130 material because it comprises a mixture of ferrite, bainite, and untempered martensite. Usually, this higher hardness in the bond line can be associated with loss of toughness in the weld and can be improved by an annealing postweld heat treatment, according to Battelle studies. In other cases, the bond line can be softer than the surrounding weld, especially in low-carbon steel grades such as SAE 1010, as well as stainless steel ERW welds.

Because the bond line represents a lack of homogeneity in the microstructure, it had been suspected of causing weld failures, especially because true discontinuities such as oxide inclusions can be trapped at the same location at the weld centerline.

Determining what bond lines really are and how dangerous they might be to the integrity of welds is worth a deeper look at the research.

During the final forging stage of the process, any nonmetallic particles and inclusions are ejected from the interface together with the plasticized metal. This excess metal on the outer diameter and sometime inner diameter can be removed by scarfing right after welding. The ERW process is mostly used in continuous automated applications of longitudinal seam welds for tubular products. A schematic of the induction welding process is shown in Figure 2a, in continuous seam welding of a tubular product. Figure 2b shows contact high-frequency (HF) welding, in which the current is transferred to the joint using sliding contacts.

In essence, the ERW process is categorized as a variant of resistance welding, because joule (resistive) heating of a very small cross section of the edges to be joined provides the heat source for welding.

The main ERW process variables include power, frequency, welding speed, V angle, impeder position, welding roll pressure, and the amount of total upset during forging, according to LeTourneau University studies. Note that the edges should not melt during the process and that process instability and arcing between the adjoining edges can occur sometimes. Any localized melting products should be ejected into the flash so that the final weld remains a solid-state joint.

It’s important to note that using the skin effect—the ability of high-frequency currents to flow at the surface of a conductor—is very important to heating efficiency at the edges to be joined. As frequency increases, the depth of the electricity-conducting skin decreases as the resistance increases for the same welding current, producing higher temperatures. Typically, frequencies from 100 to 900 kHz are used, the most common being 100 to 300 kHz for welding of steel pipes.

The second important effect in ERW is the proximity effect, which relates to the concentration of current between two parallel conductors as a function of the gap between them. At an optimum gap or proximity between the two edges of the steel shown in Figure 2b, the heat generation is optimized at a small (possibly 2- to 4-degree) V angle.

FIGURE 1. This cross section through a production ERW weld shows a typical bond line (yellow line) and a thermomechanically processed zone (TMPZ) (blue line). The ERW weld was made in a SAE 4130 steel with 9.5-mm wall thickness and Nital etch.

Critical review of an extensive weld databases was made possible by Thermatool Corp., where years of production weld cross-section samples were examined in the context of production mill parameters and flaw formation. Comparative analysis with publicly available R&D publications completed this stage of the work, based mostly on bond line microstructure, geometry, and morphology.

Researchers at LeTourneau University looked at simulated bond lines in situations in which a Gleeble 1500 thermomechanical system was coupled with a 100-kVA variable-frequency industrial power system capable of producing welds in the 100- to 900-kHz range.

The purpose of this combination was to decouple thermal effects from mechanical effects during ERW and to provide a realistic setup in which the gap between the edges, frequency, and power could be adjusted independently from forging. Power levels between 15 and 75 kW were used, while welding frequencies were set at 250, 300, and 400 kHz.

Metallographic and hardness tests were used to correlate the quality of Gleeble-simulated welds with production ERW welds. The good correlation parameters were presented at a conference on welding research at Calloway Gardens, where the Taguchi method was used to build a design of experiment (DOE) matrix and rank the weight of each thermal and mechanical input on the simulated weld quality and geometry. The effects of the total upset and strain rate on the dynamic recrystallization were studied. Compression tests were performed at different compressive strain rates between 0.5 in./in./sec. to 40 in./in./sec. and different constant peak temperatures.

From the multitude of other results found in the physical simulation series, the researchers picked one related to the thermomechanically processed zone (TMPZ) width (see Figure 3).

More than 30 simulated HF welds were made at different power levels and frequencies, and the simulated bond line remained straight and roughly of the same width of 20 to 40 microns. The average TMPZ width did change, however, especially with weld frequency (see Figure 4).

DOEs showed the relative ranking of the factors affecting TMPZ width:

This ability to produce microstructures similar to a bond line in a solid bar by subjecting it to high temperature gradients and strain rates proves that bond lines do not have to be microstructural remnants of two abutting edges during ERW.

Two different actual HF welds were compared at random to correlate hardness and grain size differences between the base metal and the bond line. As shown in Figure 6, there was sizeable grain coarsening at the SAE 1010 and 4130 steel bond lines as compared to the base metal. Accordingly, the hardness in the weld centerline was lower (all delta ferrite) in the 1010 steel and higher—40% bainite + 40% martensite + 20% delta ferrite—in the 4130 steel. The mix was determined using X-ray diffraction (XRD) analysis.

FIGURE 2. The ERW process is illustrated here with a schematic (note the impeder on the ID side and the V where heaT is generated [red arrow]) and in a top view of high-frequency welding using sliding contact shoes. (Drawing based on image taken from AWS’s Welding Handbook, 7th edition.)

The average grain size at the bond line is shown in Figure 7, as determined using optical metallography.

Electron backscatter spectrum diffraction (EBDS) analysis was performed at the bond line for the SAE 1010 and 4130 welds (see Figure 8). No apparent grain orientation differences were found at the bond line in either steel, showing again that bond lines are not so different from their surroundings.

This analysis uses backscattered electron diffraction energy peaks gathered in the scanning electron microscope. The results designate grain orientations and grain boundaries at high magnification. This is different from chemical etching, which attacks the grain boundaries and creates an optical contrast. Therefore, EBSD is more accurate than etching, and it revealed no big changes in grain orientation at the bond line.

Hardness measurements for both steels at the bond line revealed quite different results (see Figure 9).

In the carbon steels, both welds showed a hardness increase in the heat-affected zones. For the grade 4130, the martensitic microstructure was about 750 HV 0.05 around the bond line, but in the SAE 1010, there were areas of lower hardness. In the hardness profiles of the 1010 and 4130 grade welds, the slight drop confirmed the delta ferrite formation in the microstructure. XRD also revealed only ferrite at this location (see Figure 10).

When etched properly, bond lines can show sharp edges. Also, their width, position, and orientation can be adequately documented.

On the other hand, lack of parallelism of the bond line edges (especially widening) is indicative of insufficient local squeeze-out, leaving inclusions trapped in the weld.

This analysis points to the importance of the shape and orientation of the bond line as an indicator of the ERW weld quality. While no weld failures were seen to originate at sound bond lines, their geometry and orientation pointed to possible weld defects elsewhere in the weld (which, in turn, could originate failure).

Geometrical defects also can develop in ERW welds because of improper edge presentation, and the resultant thinning of the weld relative to the initial wall thickness can cause early failure.

FIGURE 3. This HF weld simulation was made in the Gleeble setup using two 10-mm-dia. SAE 4130 round bars, initially distanced at a 1-mm gap. Note the hourglass shape of the TMPZ as opposed to the straight bond line.

Dr. Leijun Li, a professor at the University of Alberta, found in the same steels that the Gleeble-simulated HF weld bond lines were not decarburized edges, because wavelength dispersive spectroscopy analysis did not show significant carbon depletion at the bond line. He found that the softer centerline region is made of delta ferrite lines entrapped at the weld centerline and proposed a plausible scenario to explain it. His schematic shows liquid metal being ejected from the interface and delta ferrite retained in the final weld (austenite transforms into pearlite on cooling). Indeed, XRD testing revealed only delta ferrite in this region (see “Bond Formation Mechanism for Resistance Welding of X70 Pipeline Steels,” Welding Journal, August 2020).

Based on actual ERW analysis and physical simulations enhanced by advanced analytical techniques, the researchers have concluded:

Budapest University of Technology and Economics

Read more from this issue

The Tube & Pipe Journal became the first magazine dedicated to serving the metal tube and pipe industry in 1990. Today, it remains the only North American publication devoted to this industry, and it has become the most trusted source of information for tube and pipe professionals.

Enjoy full access to the digital edition of STAMPING Journal, which serves the metal stamping market with the latest technology advancements, best practices, and industry news. High Carbon Steels Seal Data Not yet registered? Sign up